Shrek The Musical Was A Success!

Hello! Well can you believe it’s already March? And in a blink of an eye, our spectacular show Shrek The Musical raised the curtains to rapturous applause from the audiences over 4 nights, got rave reviews, made people laugh and cry and has once again closed the final curtains!

But not before selling an amazing 2969 tickets and playing to a Sold Out Matinee!

Thank you to everyone both on and off the stage who made the show such a success, your hard work is very much noted and appreciated.  And a very big thank you to everyone who supported us and bought tickets to see the show.  We hope you loved it as much as we did.  Our amazing photographer Andrew Morris Photography captured some of the scenes perfectly and you can see them in our blog post here.

Now just because we’ve just finished one show doesn’t mean we haven’t got anything planned for you.  In fact we have not 1 but 2 shows we are already getting ready behind the scenes for you!

On Saturday June 20th we have The Little Mermaid being performed by the Junior and Mini’s section.  This will be performed in the Arts Wing of Swansea Grand Theatre and there will be 3 performances.  Seating is limited in the Arts Wing so keep your eyes peeled for the tickets to go on sale.

And on Saturday 12th September our Seniors will be taking to the Main Stage in Swansea Grand Theatre for their Variety Show performing songs from a wide range of musicals that will be sure to get your toes tapping.  Again tickets will be on sale very soon.

Harry’s Youth Theatre is a not for profit trust run by volunteers fondly known as Harrys Angels.  We are continuing to raise funds with a group of parents called “Harry’s Helpers” this month there has been a variety of different events ….

We still have some spaces available in our 100 Club so if you haven’t got your number(s) then get in touch and we can arrange it for you.  In case you don’t know our 100 Club is an easy to way for you to be in with a chance to win £25 each month. All you have to do is pay £1 per month (min of 6 months) and you will be allocated a number. Each month a number will be drawn out of the hat and the winner will win £25, the remaining funds will go into our Harry’s Fundraising Pot.

The Show Raffle tickets were sold before and during each performance of the Show and drawn on Sun 16th February with 16 lucky winners receiving their prizes.

On Saturday 29th Feb, members of Harry’s and their supporters were invited to our After Show Party to celebrate everyone’s hard work and the success of Shrek The Musical.  With a Disco, food, party games, awards and a big raffle, the evening was enjoyed by all

Check Out The Photos Here... 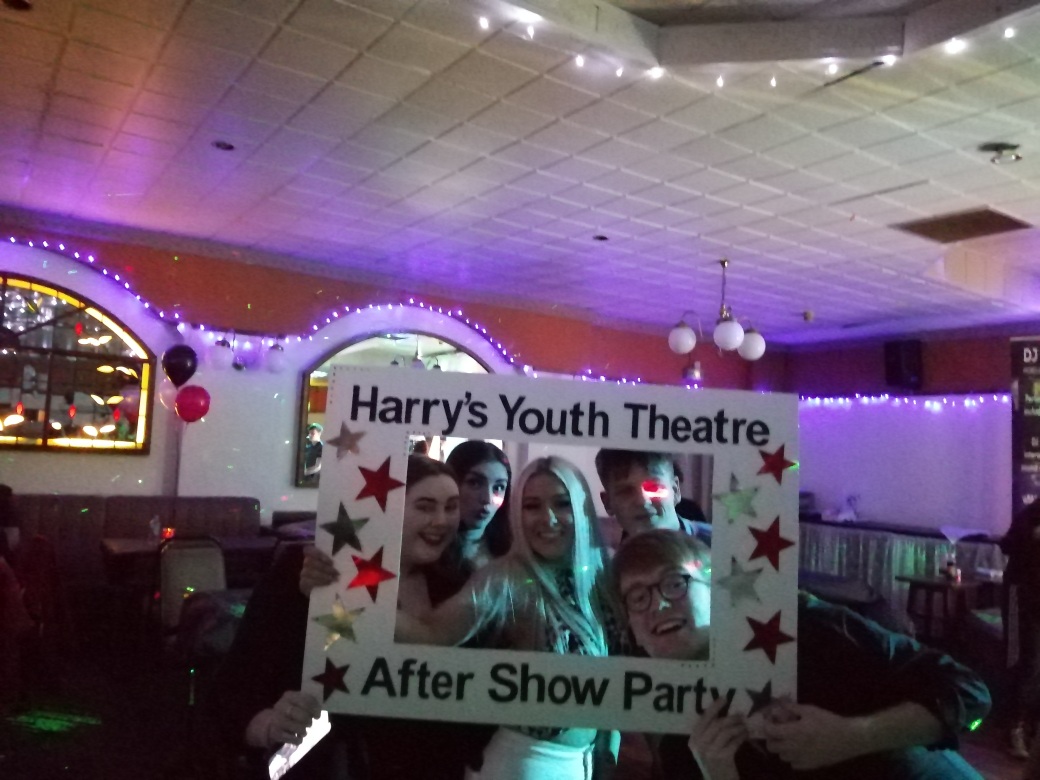 “I attended the very first Harry’s class back in 2002, and never thought it would become such a massive part of my life! I was lucky enough to be involved in at least 2 productions a year with Harry’s for 10 years! (Until I became too old to perform with them, otherwise I’d definitely still be a member!) these productions included: The Wizard of Oz, The Sound of Music, Fame, We Will Rock You, Billy Elliot and Oliver, to name just a few. Although Oliver was my last show performing with Harry’s, I never had any intention of leaving it behind. I have since helped in rehearsals every Monday and backstage for all of their shows. I now teach the Minis, our 3-6 year old section, alongside Rebecca, who is also a past Harry’s member! Harry’s has always been, and I’m sure always will be like one big family! I have made friends that I know will last me a lifetime. Being a part of this group has taught me many life skills and definitely made me a more confident person. The discipline you learn at Harry’s can be applied to any aspect of life. Finally, Harry’s is run by a group of volunteers, the ‘Angels’ and they really are angels! They make sure Harry’s runs smoothly, allowing our members to put on spectacular shows, year after year. But as well as that, they are a team of people willing to offer their support to the young people whenever or why ever they may need it! I have loved the past 17 years of Harry’s and look forward to experiencing lots more of the opportunities Harry’s gives young people, and myself.”

Thank you once again to everyone who supported us during Shrek The Musical, we are very excited now to look forward to The Little Mermaid and our Variety Show!

If you have any questions or feedback about Harry’s, please do get in touch, we love hearing from you.

And if you know anyone who may be interested in receiving Harry’s Newsletter, please forward this email to them or if they want their own copy tell them to sign up at

Speak to you soon

All at Harry’s Youth Theatre